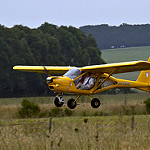 The Foxbat is a very short take-off and landing (VSTOL) aircraft. With a range of available propellors, being set as required; both the LS and notably the L2 can achieve breathtaking climb performance without compromising very respectable cruise speed. Larger wheel & tyre combinations are also available options for more ‘outback’ capability. 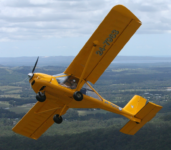 In all configurations, the Foxbat control response and feedback allow confidence and trust to be developed, especially for tight entry/short field approaches and the like. Stalling is a non-event, with or without flap, as there is no tendency to drop a wing and you can therefore side-slip safely with confidence and authority.

The doors are glazed to the floor, the windscreen is vast with clear views both upward and behind. If you’re just sightseeing, you can see straight down without banking for unimpeded views and camera shots. The outstanding all round visibility is however an enormous complement to safety for both short field or busy circuit traffic scenarios.

The A32 Vixxen is the next generation of aircraft available from Aeroprakt. With a similar wing design to the A22 but with a more aerodynamic and streamlined airframe, allowing it to fly both faster and slower than the A22. The A32 also benefits from a more spacious feel inside the cockpit.

The Foxbat A22LS SuperSport 600 is the latest Light Sport generation of the proven A22, which has smaller aerodynamic surfaces and gives rise to sportier handling. Additionally, the  A22L2 Microlight also benefits from the design enhancements of combined research developments. In both cases however, both the LS and the L2 retain the remarkable short field performance.

For more information on all the aircraft we offer take a look at our “Aircraft” tab on the navigation bar at the top of the page.

The A32 vixxen and the A22L series Foxbat is predominantly aluminium construction, not a rag and tube aircraft with primitive design and construction techniques. Most of the rivets are aviation “buck” rivets, with very few pop rivets. Final assembly riveting is not required by the builder as apprentice served aircraft fitters complete all structural riveting at the factory. The quality of the manufacture and fittings is not usually found in this class of aircraft and this is worth comparative observation. As one example; the wing mounting points have self -aligning spherical bushes fitted and indeed, wherever a bolt is used as a pivot, there is always a spherical bush or bronze insert fitted to minimise friction and wear to provide security and service longevity. The assembly process is straightforward and can be completed without assistance where a small workshop or single garage could be used comfortably. That said, full ongoing support is in any case provided here in the UK by the importer Dragon Aviation; via vastly experienced guidance and comprehensive documentation.

Watch some of these amazing videos to see how well the A22 handles and what fun you can have!

WHAT CUSTOMERS ARE SAYING

A John Deere of the Air !
With the capacity to carry Farmers in Comfort and safety
Engineering is Brilliant
Performance is Super Cool
Demonstration is available by request at Fishburn

Delighted with new Vixxen remarkable speed range with safe handling for farm strip flying plus comfortable 110 knot cruise speed for touring . You are missing out if by you don’t test fly one ! I have dealt with Ray for nearly ten years now Always had great service and backup which is essential for any aircraft owner

You can’t buy happiness but you buy a Vixxen, and that amounts to the same thing. Fantastic flying weather today. I took G-Vxxy for a flight around the clouds to see the autumn colours. It doesn’t get much better than this.

“Although I did not build G-CHHB, a Foxbat 600LS, having flown only 20hrs or so in her, I felt I just had to ‘pen to paper!’. I have spent some 40 yrs in Aviation, 12 of them flying 6 types of helicopter, everything from a Bell47 to the Chinook, and 28 of them flying fixed wing, Chipmunk & Christen Eagle to Boeing 747, ending with a Command on the Boeing 777. I can honestly say that I thought the Chipmunk would be the most beautifully balanced aircraft I would ever have the privilege of flying, but that was before I took delivery of ‘HB’! She is so light on the controls, even with full flap, you think left, you fly left! One only needs to hold the stick with fingers and thumb as anything else would over control. I cannot wax lyrical enough about the cavernous cockpit, the performance, STOL capability, economy, visibility etc etc. All in all, I think you could safely state I am one of the marques biggest fans!”

Never once regretted buying a Foxbat, it’s a go-anywhere, in comfort, economical aircraft. Very benign handling with absolutely no surprises. The initial build was very straightforward with well documented and illustrated literature supplied. The importer (Dragon Aviation) always attentive and just a phone call away. All initial build, post build requirements, queries and re-permits have always been handled by them in a timely and accommodating manner. G-CBYH

My first Foxbat required extensive wing repairs (my fault) but Dragon Aviation made an excellent job of it and it flew as if nothing had happened. After it was destroyed, another Foxbat happened to be with Dragon for repair when the owner decided to quit flying. I purchased it after seeing for myself that the repairs were up to Aeroprakt standards – those flush rivets take real skill to get right!

The Foxbat gives amazing short field performance, allowing me to operate out of a 175 m grass strip at my home, yet remaining very capable as a roomy touring aircraft. Incredible visibility out, makes it a delight for pleasure flying. It is a superb all-round aircraft and very rewarding to own and operate. Running costs are a fraction of a certified aircraft and the type support given by Dragon Aviation is first class in all respects, from the start of building to annual inspection and repairs. – G-EOID

Our Foxbat is 7 years and 570 hours old and still in fine fettle. The kit was excellent – there was nothing that did not fit perfectly-, the assembly manual comprehensive, and Ray has provided friendly assistance on the rare occasions when it has been required. – G-CDTZ

I have owned 3 Foxbats including the LS and sport, I also owned the first Foxbat Supersport 600. All superb aircraft, all fast built kits, this combined with the excellent support from Ray at Dragon Aviation makes this a wonderful aircraft to build and own. I’m currently considering another UK first, the Foxbat Supersport seaplane. Fly a Foxbat and you will want to own one. G-CGTZ and G-CHHB

It is a pleasure to write about building my Foxbat. Mine was the first home-build in the country and I have never done anything like this before, but the whole experience was a huge pleasure. The beauty of the kit and the excellent support and help you provided made it all perfectly straightforward and, of course, the aircraft is a joy too fly. I am also very grateful for your continued interest and assistance with maintenance. It is now 11 years since her first flight and she is as good as ever. – G-FXBT

Ray has always been there on the end of the ‘phone & when he’s busy, he always rings back. For the most part my questions have been elementary and Ray has been most patient in translating my vague descriptions into straightforward solutions. From early on, it was clear that Ray has an excellent understanding of engineering and an ability to eschew obfuscation (OK….keep it simple).